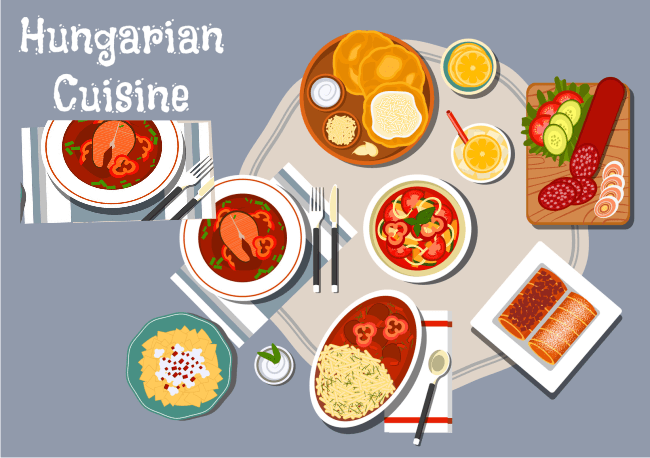 Hungary has never really been thought of as much of a culinary capital. Often overlooked in favour of food from better-known European gastronomy giants such as Italy and France, few people take the time to explore what Hungary has to offer. This is a real shame for the foodies of the world because, believe it or not, Hungarian dishes is absolutely delicious.

Like most of East and Central Europe, Hungary’s most prominent dishes centre around meat and potatoes in various forms. But, somehow, Hungary has managed to spice up this traditional coupling and make it mouth-wateringly good. So, if you’re thinking about delving into Hungarian food and want some inspiration, here is a list of Hungarian dishes you would be crazy to miss.

Let’s start with the most popular of all of the Hungarain dishes: goulash. Often considered the national dish, goulash is one of the heartiest meals you will ever eat. The premise is simple: broth, meat and potatoes. But, goulash is so much more than that. The soup is spiced with paprika and the meat is slow cooked so it falls apart in your mouth. Different variations of the dish will have vegetables or other ingredients added in. However you eat it, you are guaranteed to love it.

If you are counting the calories then steer clear of langos. However, if you’re happy to treat yourself every once in a while then go out and get one right now. Langos is a big disk of deep-fried dough – often whoever is making your langos will deep fry the dough right there in front of you. Once the oil has drained off, the dough is then smothered in sour cream and topped with grated cheese. This is the standard langos, however, to spice it up you can add veggies, ham, onions or even bacon on top.

I don’t even know how to translate this one into English but Főzelék is basically a cross between soup and stew but not quite like either – whatever it is, it is good food. The dish is quick and easy to make and can be found all over Hungary. Also, as a bonus, it is pretty healthy by Hungarian standards. Főzelék comes in a range of different flavours and includes potatoes, peas, lentils and carrots with sour cream and flour to thicken it up.

Literally translating as stew, Pörkölt is a delicious meal that will keep you feeling full for hours. Order this in a restaurant and you will be presented with rich stewed meat that has been roasted with onion, paprika and spices. The stew is invariably juicy and incredibly more-ish. To accompany your stew are little dumplings known as nokedli. The best thing to compare this typical Hungarian creation to is gnocchi – but it’s not really the same thing. I guess you’ll just have to try it and find out for yourself.

In case you thought Hungarian dishes were all about savoury dishes – now it’s time for dessert. When dobos torte first came on the scene in Hungary it broke boundaries. Buttercream, the main ingredient, had never been used before and the technology with which the cake was made was ground-breaking. This iconic cake is made with sponge cake, buttercream and caramel. Simple but divine.