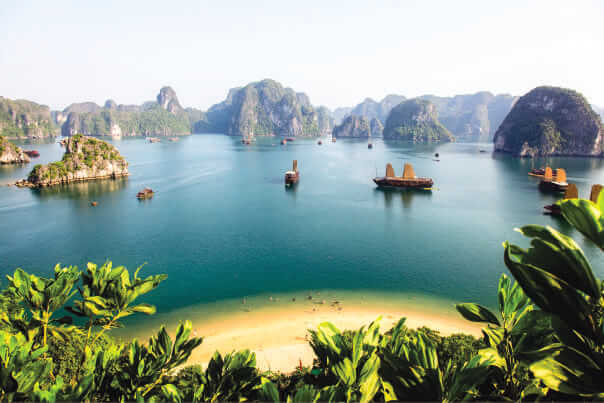 In 1972, the UN began recognising places of importance around the world and designating them as UNESCO World Heritage sites. This list now includes natural hotspots, man-made monuments and even entire cities. The designation means that the area must be protected in order to preserve the world’s cultural and natural heritage. Basically, UNESCO stops beautiful things from being ruined by people.

If you are a keen traveller, it is likely that you have already visited a UNESCO site without even realising it. They are everywhere. However, not all UNESCO World Heritage sites are equal – some are much more impressive than others. Here are five of the best UNESCO World Heritage natural sites on the planet. Which ones are you going to add to your bucket list?

The Ngorongoro Conservation Area is everything you expect an African safari destination to be and more. This enormous crater is 12 miles wide and often referred to as the Garden of Eden due to its idyllic landscape and abundance of wildlife. Here, you can see everything you hoped to see on safari – elephants, hippos, lions, and zebras to name just a few. A trip to Ngorongoro is truly a once in a lifetime experience that will stay with you forever.

Just outside Hanoi, Vietnam’s capital city, is the impressive Ha Long Bay. Those who want to experience Ha Long Bagwill need to travel by boat. Tours float leisurely around the rugged islands that rise up out of the water. Each of these islands is like a mini mountain, with craggy cliff faces covered in lush, green vegetation. Traditional junkers sail around the islands, packed with passengers who spend anything up to three days exploring the area.

Mother Nature really outdid herself when she created the Plitvice National Park. Located halfway between the cities of Zadar and Zagreb (the capital), the park is filled with waterfalls that cascade over rocks worn smooth over time. There is a boardwalk that runs through the park and takes visitors around the lakes and through the verdant forest that flanks the water on all sides. Rowing boats are also available for those who want to explore the lakes more extensively.

There are few places on earth more fascinating than the Galapagos Islands. The islands are best known as the spot where Darwin developed his theory of evolution and nowadays, people from all over the world visit the iconic archipelago to admire exactly what so captivated Darwin. Giant tortoises, marine iguanas, sea lions and dozens of different species of bird call these islands home. Those who visit the Galapagos Islands have a good chance of seeing all these creatures and more.

A desert might not seem that interesting to visit on paper. What’s so exciting about a huge stretch of sand right? Once you visit Wadi Rum, you will quickly change your opinion on deserts. Thousands of years ago, ancient traders used the desert to transport goods across the region; today the desert is used to imitate the moon in films. No trip to Jordan would be complete without spending some time traversing the sand and learning about the local Bedouin culture.