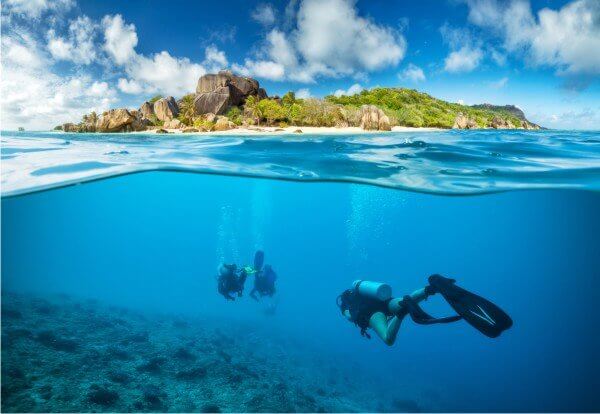 We all know that the earth is not in a good way right now. The UN recently predicted that we have 12 years to fix the damage we have caused or the world as we know it will be irreversibly ruined. But, as it stands the world is still in tact so it makes sense to make the most of while we still can.

The world is full of natural beauty, but some of it is rapidly disappearing it. Glaciers are melting and forests are being chopped down, yet there is still time to admire these glorious pockets of nature before humanity ruins them entirely. If you’re ready to concoct your endangered nature bucket list, here are seven places that should be your top priority.

With the seas rising at an alarming rate, clusters of islands, such as the Seychelles, are at risk of disappearing off the face of the earth within our lifetime. And, this would be a serious shame, not just for the people and wildlife that call this archipelago home. The beaches here are pearly white, the jungle is lush, and the sun is forever shining – what more could you ask of a destination?

Patagonia’s iconic glaciers may soon be completely extinct due to the increase in global temperature. The ice is receding faster than ever before and these majestic glaciers are sadly disappearing. Patagonia is by no means the most hospitable place on earth, but it might just be one of the most beautiful. Grab your ice-trekking boots and head down there post haste!

The Forests of Madagascar

Madagascar’s beautiful forests have been plagued with a mixture of wildfires and deforestation. This deadly combination has given the island’s forests roughly 35 more years to live. If you want to see endemic lemurs swinging from branches and squawking to each other, you better make your way over to Madagascar quickly.

Widely considered the most romantic city in the world, Venice is coming to the end of its life. The city has been slowly sinking for a while now and it shows no signs of stopping. Before it’s too late, hop in a gondola or stroll through the city and take in some of the country’s, and indeed the world’s, most sublime historical and cultural wonders.

Brought into the public eye by Charles Darwin well over a century ago, this South American archipelago is rapidly declining. The influx of tourists in recent years is damaging the eco-system as is the introduction of foreign species. The endemic wildlife that has made these islands famous might not last much longer.

The Congo Basin boasts the world’s second largest rainforest and thousands of different plant and animal species. However, experts believe that in just over 20 years, around two-thirds of the rainforest will be gone. When it comes to natural beauty, there are few places that can compete with the Congo Basin and a trek under its leafy canopy is an experience that will stay with you forever.

Chances are you have seen photos of your friends bobbing like corks in the extremely salty water of the Dead Sea. Well, you better get yours soon as it might not be around much longer. The Dead Sea is actually a lake and it is fed by the River Jordan. Unfortunately, the people of who live on the banks of the river are using too much of its water and this could cause the Dead Sea to dry out within 50 years.