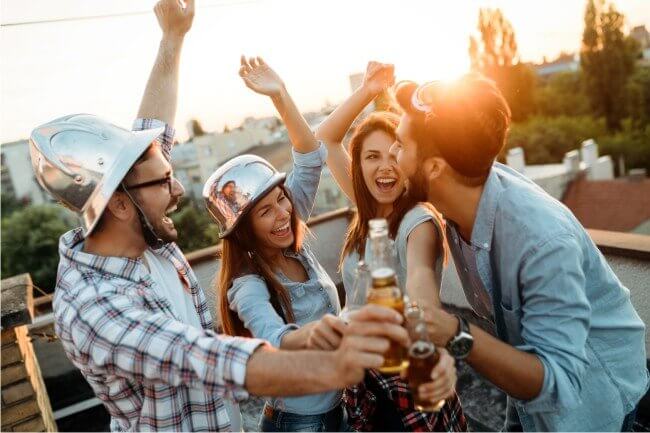 Where are London’s most exclusive bars?What’s the one thing that’s even better than a bar? That’s right, an exclusive bar with a high profile clientele. Nothing tastes better than a double shot of vodka mixed with a splash of elite. There are also the added elements of smugness and bragging rights at having found a exclusive/member’s only/secret bar (although this article might eradicate some of their elusiveness so apologies in advance for stripping you of your secret knowledge), which make the prospect of spending the evening boozing and schmoozing in one so appealing.

So, time to stop going to your regular, boring bars that everyone and their mother know about and to high-tail it down to one of London’s most exclusive drinking venues.

Tucked away behind a beaten up old door that looks more like the entrance to a disused squat than a drinking lounge, sits this little gem. Spread out across several floors, the bar is always heaving with London’s most stylish drinkers. The cocktail menu is divine and there is always plenty of interesting chit chat flying around the room. Book in advance though because, despite being a secret bar, far too many people have discovered it.

CellarDoor is an unfathomably chic bar situated in what was once an underground Victorian loo. With cabaret, DJs and drag shows appearing on a regular basis in this joint, it goes without saying that guests never have a dull moment here. Their drinks menu is pretty extensive but the real pièce de résistance here is the snuff that they sell behind the bar, transporting everyone who takes it right back to a different era.

What’s more exclusive than a club that has a membership policy? Not much is the answer. This place is decked out in quirky décor and has a great vibe, perfect for chilling after a trip to the theatre (even the casts frequent this joint on occasion). General entertainment includes cabaret, live bands and all sorts of other musical delights.

This impossibly difficult to find bar is a little different to anything else you might come across in Soho. Gone are the glitzy light fixtures and shiny floors of some of the more swanky bars and in their places are strung out, thread-bare carpets, peeling wallpaper and a ramshackle bar stocked with the most random selection of beverages imaginable. If you want to escape the heaving venues that dominate Soho, this is your place.

Possibly the most exclusive club in the West End, Gerry’s Club is the ultimate hangout spot for actors, producers, directors and, well, pretty much anyone involved in the Arts. The only problem is getting in. It operates a strict members only policy, although non-members are allowed in as guests of members. Great so I’ll just become a member. Not so fast. Membership is about as easy to get as a winning lottery ticket and those who apply must have a proposer and seconder who are already members. However, if you can jump over the all hurdles you’re sure to be in for a good night.

While this bar is less secret than the others mentioned, it deserves a place on the list simply in honour of whichever genius decided to create a venue that serves cocktails AND desserts, the two most beautiful things on this humble planet. The menu is a wonder to behold and treats are served until midnight or 1:30am, depending on which day of the week it is.