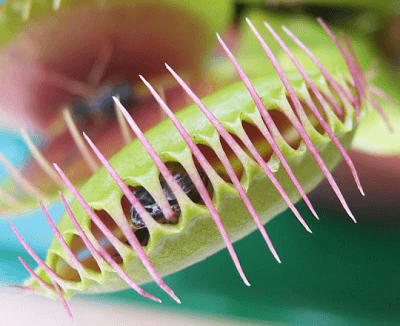 Plants are part of the amazing gifts God gave the human race. They sustain us by supplying oxygen and provide shelter to other animals just to mention a few.

Here’s top 10 of most unique plants in the world

Welwitschia grows from a short, thick, woody trunk, with only two leaves that continuously grow from their base, and a long, thick taproot. After germination, the cotyledons grow to 25–35 mm in length, and are followed shortly afterward by the appearance of two permanent leaves. These leaves are produced opposite of the cotyledons, and continue to grow throughout the entire life of the plant. They eventually grow to a length of 2–4 m and usually become split into several strap-shaped sections, thus sometimes disguising the origin from only two leaves. After these appear, two cotyledonary buds appear; in these, the growing tip dies, causing elongation of the buds. Growth continues sideways, which forms the obconical growth of the stem. The species is dioecious, with separate male and female plants. Fertilization, that is, the transfer of the pollen from the male to the female strobili, is carried out by insects that are attracted by “nectar” produced on both male and female strobili.
The age of the plants is difficult to assess, but they are very long-lived, living 1000 years or more. Some individuals may be more than 2000 years old.

Dionaea muscipula is a carnivorous plant that catches and digests animal prey, mostly insects and arachnids. Its trapping structure is formed by the terminal portion of each of the plant’s leaves and is triggered by tiny hairs on their inner surfaces. When an insect or spider crawling along the leaves comes into contact with one or more of the hairs twice in succession, the trap closes. The requirement of redundant triggering in this mechanism serves as a safeguard against a waste of energy in trapping objects with no nutritional value.
The plant’s common name refers to Venus, the Roman goddess of love, whereas the genus name refers to Dione. Dionaea is a monotypic genus closely related to the waterwheel plant and sundews. 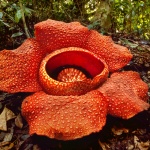 Rafflesia arnoldii is a member of the genus Rafflesia. It is noted for producing the largest individual flower on earth. It occurs only in the rainforests of Sumatra and Borneo in the Indonesian Archipelago. Although there are some plants with larger flowering organs like the Titan Arum and Talipot palm, those are technically clusters of many flowers.

The Telegraph Plant (Codariocalyx motorius, often placed in Desmodium), also known as Semaphore Plant, is a tropical Asian shrub, one of a few plants capable of rapid movement; others include Mimosa and the Venus Flytrap.
It is widely distributed throughout Bangladesh, Bhutan, Cambodia, China, India, Indonesia, Laos, Malaysia, Myanmar, Nepal, Pakistan, Sri Lanka, Taiwan, Thailand and Vietnam. It can even be found on the Society Islands, a remote chain of islands in the South Pacific. It produces small purple flowers. Telegraph Plant contains small amounts of tryptamine alkaloids in leaves, stem[verification needed] and root, namely DMT and 5-MeO-DMT.
This plant is famous for its movement of small lateral leaflets at speeds rapid enough to be perceivable with the naked eye. This is a strategy to maximise sunlight by tracking the sun. Each leaf is equipped with a hinge that permits it to be moved in order to receive more sunlight, but the weight of these leaves means the plant must expend a lot of energy in moving it. To optimise movement of large leaves, each large leaf has two small leaflets at its base. These move constantly along an elliptical path, sampling the intensity of sunlight, and directing the large leaf to the area of most intensity. 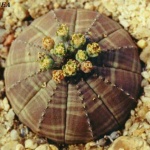 Euphorbia obesa looks like a perfect ball, thornless and extremely decorative. Its diameter is 6 cm for young subjects, but can reach 15 cm for the old ones. Its shape is spherical for young individuals and cylindrical for the old ones. It contains a water reservoir for periods of drought.
adorned with small deep gibbosity regularly planted on the edges. It is green with horizontal lighter or darker stripes. In the wild, and with exposure to direct sunlight, it shows red and purple areas.
The small flowers are insignificant in apex. In fact, like all Euphorbia, flowers are called cyathia. Like all Euphorbia, the latex sap is toxic. 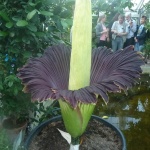 The titan arum or Amorphophallus titanum (from Ancient Greek amorphos, “without form, misshapen” + phallos, “penis”, and titan, “giant”) is a flowering plant with the largest unbranched inflorescence in the world. The largest single flower is borne by the Rafflesia arnoldii; the largest branched inflorescence in the plant kingdom belongs to the Talipot palm (Corypha umbraculifera). It thrives at the edges of rainforests near open grasslands. 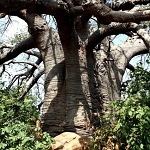 Adansonia is a genus containing eight species of trees, native to Madagascar (having six species), mainland Africa and Australia (one species in each). The mainland African species also occurs on Madagascar, but it is not a native of that island.
A typical common name is baobab. Other common names include boab, boaboa, bottle tree, upside-down tree, and monkey bread tree. The species reach heights of 5 to 30 metres (16 to 98 ft) and trunk diameters of 7 to 11 metres (23 to 36 ft). An African Baobab specimen in Limpopo Province, South Africa, often considered the largest example alive, has a circumference of 47 metres (150 ft) and an average diameter of 15 metres (49 ft).[1] 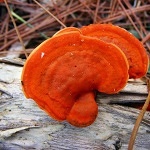 Dracaena cinnabari is a Dragon Tree native to the Socotra archipelago. It is also referred to as the Dragon Blood Tree and Socotra Dragon Tree. It is so called due to the red sap that the trees produce. It was first formally described by Isaac Bayley Balfour in 1882. A miniature Icon of this tree is in Windows as Network-Icon.

9. Selaginella lepidophylla: Plants that Rise Back

Selaginella lepidophylla (syn. Lycopodium lepidophyllum) is a species of desert plant in the spikemoss family (Selaginellaceae). S. lepidophylla is noted for its ability to survive almost complete desiccation; during dry weather in its native habitat, its stems curl into a tight ball and uncurl when exposed to moisture. It is native to the Chihuahuan Desert.
Common names for this plant include false rose of Jericho, rose of Jericho, resurrection plant, dinosaur plant, siempre viva, stone flower, and doradilla.
Selaginella lepidophylla is easily confused with Anastatica: both species are resurrection plants and form tumbleweeds, and they share the common name “rose of Jericho”. 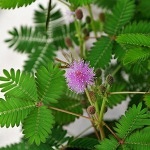 Mimosa pudica (Sensitive Plant) (pudica = shy), is a creeping annual or perennial herb often grown for its curiosity value: the compound leaves fold inward and droop when touched or shaken, re-opening within minutes. The species is native to South America and Central America, but is now a pantropical weed.
Mimosa pudica is well known for its rapid plant movement.